Wes Howard-Brook has been teaching, writing and living at the intersection of church, academy and the world since 1988. After a career as an attorney for the US federal government and Washington state governments, Wes left law practice in 1985 to earn a Master of Divinity degree at Seattle University. During the late 1980s and early 1990s, he was part of Galilee Circle, an ecumenical Christian small community, which sought to live the radical Word of the Gospel in both personal and public ways, including a series of nonviolent direct actions at various private and public places of warmaking and imperial violence.

Sue Ferguson Johnson is a spiritual director of individuals, couples, and groups, and a retreat leader and Scripture teacher of many years’ experience. Formerly a psychologist, Sue left her practice to engage in full-time ministry in 2002. Sue was raised in the United Methodist Church, but with Wes is  now at home in the Mennonite Church, where she has been instrumental in reshaping the local church from a committee model to a prayer-Scripture-discernment model. With Wes, she cowrote a Pax Christi USA Lent Reflection booklet.

Wes has written, co-written or co-edited six books, including Unveiling Empire: Reading Revelation Then and Now (with Australian Anthony Gwyther) and his most recent, “Come Out, My People!:” God’s Call Out of Empire In the Bible and Beyond (Winner, Catholic Press Association Award: First Place in Scripture). He has also written for numerous publications, including Sojourners, The Other Side, Tikkun Daily, and several Catholic Worker newspapers.

Praise for ‘Come Out, My People’:

Howard-Brook undertakes what few dare anymore: an introductory primer for the whole Bible. Using some of the best of recent scholarship, but without the lamentable dichotomies, this book attends to historical and canonical issues; to social theory and spirituality; to scripture’s irreducible Jewishness and its critical relationship to empire; to its inner conflicts and its deeper unity; to Abraham and Christ. . . This book invites disciples to connect the dots, in order to recover our ancient, anti-imperial identity, and to embrace a radical faith and practice that are personal and political. – Ched Myers

A remarkable offering for those who care about the interface of power and faith with all the threats and seductions that go with it . . . . As I read, I felt overwhelmed, both by the mass of data and by the cunning of interpretation. I could not put it down, and expect to continue to be instructed by it. – Walter Brueggemann

Howard-Brook illuminates how ancient empires exercised control and manipulation of people not simply by political and military means, but also through the religion of empire. Throughout he makes clear that the core message of the God of creation is to call people out of empire, to refuse to cooperate with the forces of destruction and domination today” – Richard Horsley

(see more detailed praise and reviews in journals at http://www.abideinme.net/comp.htm)

Sue’s call and passion includes accompanying spiritual leaders and others in listening to God and others, seeking to collaboratively create a generative space, centered in a rhythm and practices through which all can embrace and pour out Life together.

Together, Wes and Sue share the ministry “Abide in Me,” grounded in the imagery from the Gospel of John that calls disciples to integrate the inner and outer, the mystical and prophetic, the private and public journeys. Every Thursday since September 2004, they have hosted a John’s gospel group in their home, where 25 individuals join for prayer, study, laughter and communion. After over eight years of gathering, they are nearing the end of John’s gospel! They also teach and lead retreats across the US.

Sue and Wes together have five children, ages 22-37, and two grandchildren. They live outside Seattle on the edge of Tiger Mountain, where Wes walks each and every day with their golden retriever, Athena. They seek to be open to the leading of the Holy Spirit in all that they do, in proclaiming and embodying Jesus’ Word of passionate purity in love and truth for all creation. 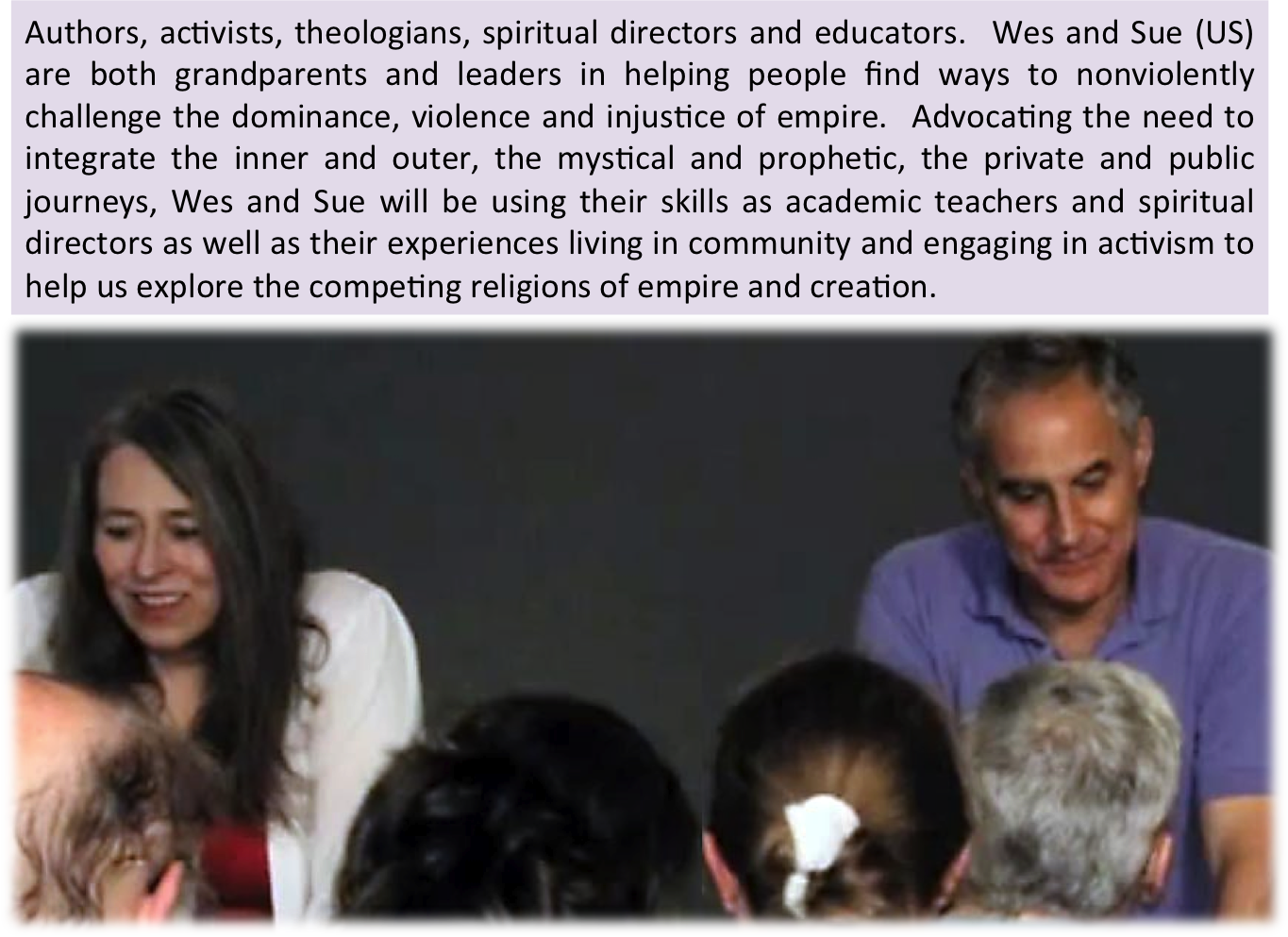 Beyond Jew or Christian: Opening New Space for Interreligious Conversation

From before I started my bar mitzvah training, I was terrified of Christians. I was born in the shadow of the Holocaust and grew up with the specter of anti-Semitism in the air. For better or worse, I didn’t actually get to know any “live” Christians throughout my childhood in an overwhelmingly Jewish part of Los Angeles, so my stereotypes of Christians as Jew-haters was left largely intact until I moved to Berkeley for college in the early 70s.  CLICK TO CONTINUE

I’ve been doing a lot of reflection on my experience of the Disarm Now Plowshares approach to the courtroom. I write this with great respect for those who have risked their freedom in witnessing against the weapons of mass destruction held by the United States, but with a seemingly great difference in understanding of the spiritual nature of the courtroom. I hope my words might generate some much needed conversation on where our hope truly lies.

In my “previous life,” I worked as counsel to the US Senate Judiciary Committee, and now teach and write about the biblical encounter with “empire” while seeking to follow Jesus, the Crucified and Risen One. These two contrasting life directions have combined to reveal to me some foundational truths. First, we live amid two diametrically opposed reigns of power. One of these is animated by the spirit of what Jesus calls “mammon”: that power of wealth which seeks to dominate and control all else, including people, the earth and other competing spirits. The other is animated by the spirit of God, which constantly seeks to heal our imperial brokenness and to restore the original, created glory and dignity of all creation. CLICK TO CONTINUE

Cutting ties with religion of empire

A year ago, I spent ten days staying at Tahrir Square in Cairo, marching with protesters after 1400 of us were denied entrance into Gaza by Egyptian President Hosni Mubarak. We were threatened, harassed and followed by undercover police. It was a scary experience of dictatorship, repression, and empire.

So I rejoice with the crowds who peacefully assembled and marched these last few weeks in Cairo demanding an end to the brutal thirty year, U.S.-backed regime of Mubarak. I hope and pray that the good people of Egypt will find justice, nonviolent democracy, and new freedom.

A ground-breaking new book reads the Bible itself as God’s call to humanity to come out of empire and live in peace in God’s creation.