The National Inspiritor Tour seeks to inspire and equip people exploring or engaging in active nonviolence for peace and justice in our world.

This tour will inspire you, it will skill, equip and empower you to take a stand for the causes you believe makes for a more peaceful, just and equal world we long to see.

Wes and Sue together are a dynamic team that will challenge you  intellectually, deepen your spiritual and provide ways to increase your capacity for action. 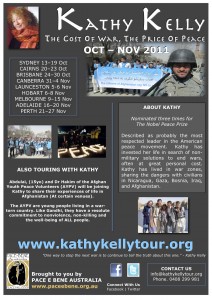 American peace activist who has been nominated for the Nobel Peace Prize three times. She is coordinator of Voices for Creative Nonviolence.

Kathy has been described as “probably the most respected leader in the American peace movement.”

Between 1996 and 2003 Kathy and her companions formed 70 delegations that openly defied economic sanctions by bringing medicines to children and families in Iraq. They lived in Baghdad throughout the 2003 “Shock and Awe” bombing. In 2009, she lived in Gaza during the Operation Cast Lead bombing; later that year, Voices formed another small delegation to visit Pakistan, aiming to learn more about the effects of U.S. drone warfare on the civilian population and to better understand consequences of U.S. foreign policy in Pakistan. Kathy’s most recent trip to the region, in 2010, included a visit to Afghanistan, focusing on surgical centers serving victims of war.  Kathy has been arrested more than 60 times both at home and abroad.

Angie currently teaches a course, Theology for Peacemakers, at the Department of Theology, St Louis University, as well as being an advocate for immigrant services.  In 1986 she spent six months in Guatemala with Peace Brigades International. The entire leadership of the Families of the Disappeared had just been killed during Holy Week that year and Angie and several other international people went to Guatemala to accompany the new leadership group as a form of nonviolent protection.  Angie has also travelled to Nicaragua on a fact-finding mission.  Her most recent trip abroad was to the West Bank, where Angie was part of the International Solidarity Committee and  to participated in the olive harvest and  worked on project with local communities. This trip gave her the opportunity to observe the realities of the Israeli occupation firsthand.   Angie’s reflections were published as “An Occupational Hazard” in America Magazine, and in a book review of Live from Palestine in the National Catholic Reporter.   Angie is the editor of The Universe Bends Toward Justice: A Reader in Christian Nonviolence in the U.S. and her latest book, The Book of Sins, (an account of the effects of capitalism on Christianity) will be published later this year. At the invitation of Pax Christi/USA Angie has also developed a training program in nonviolent response to personal assault.

During her time in Australia, Angie  held public meetings in each city and reflective retreats on the theology for peacemakers.  Angie lead us in reflections for spiritual formation (how do we deepen our spiritual centre and our spiritual resources for our work in nonviolence?) and for the practice of nonviolence (how can we become more consistent in our lives and adopt nonviolence as a way of life?).   Angie was also aware that the time of her visit coincided with the anniversary of the bombing of Hiroshima and Nakasaki.

John Dear is an internationally known voice for peace and nonviolence. A Jesuit 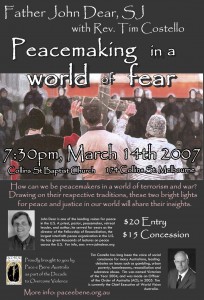 priest, pastor, peacemaker, organizer, lecturer, and retreat leader, he is the author/editor of 30 books, including his autobiography, “A Persistent Peace.” In 2008, John was nominated for the Nobel Peace Prize by Archbishop Desmond Tutu.

From 1998 until December 2000, he served as the executive director of the Fellowship of Reconciliation, the largest interfaith peace organization in the United States.

After the September 11th, 2001 attacks on the World Trade Center, John served as a Red Cross Chaplain, and became one of the coordinators of the chaplain program at the Family Assistance Center. He worked with some 1,500 family members who lost loved ones, as well as hundreds of firefighters and police officers, while at the same time, he spoke out against the U.S. bombing of Afghanistan.

From 2002-2004, he served as pastor of several parishes in northeastern New Mexico. He co-founded Pax Christi New Mexico and works on a nonviolent campaign to disarm Los Alamos. These days, he lectures to tens of thousands of people each year in churches and schools across the country and the world. He also  writes a weekly column for the “National Catholic Reporter” at www.ncrcafe.org.

A longtime practitioner and teacher of nonviolence, John has written hundreds of articles and given thousands of talks on nonviolence. His many books include: Lazarus, Come Forth!; Living Peace; Put Down Your Sword; Transfiguration; The Questions of Jesus; Mary of Nazareth, Prophet of Peace; Jesus the Rebel; Mohandas Gandhi; Peace Behind Bars: A Journal from Jail; The God of Peace: Toward a Theology of Nonviolence; You Will Be My Witnesses; Disarming the Heart: Toward a Vow of Nonviolence; The Sound of Listening; The Sacrament of Civil Disobedience; Seeds of Nonviolence; Our God Is Nonviolent; and Oscar Romero and the Nonviolent Struggle for Justice. He has edited: The Road to Peace: Writings on Peace and Justice by Henri Nouwen; And the Risen Bread: The Selected Poems of Daniel Berrigan, 1957-1997; and The Vision of Peace: Faith and Hope in Northern Ireland: The Writings of Nobel Laureate Mairead Maguire.

John’s peacework has taken him to El Salvador, where he lived and worked in a refugee camp in 1985; to Guatemala, Nicaragua, Haiti, the Middle East, Colombia, and the Philipines; to Northern Ireland where he lived and worked at a human rights center for a year; and to Iraq, where he led a delegation of Nobel Peace Prize winners to witness the effects of the deadly sanctions on Iraqi children. He has run a shelter for the homeless in Washington, DC; taught theology at Fordham University; and served as Executive Director of the Sacred Heart Center, a community center for disenfranchized women and children in Richmond, Virginia.

A native of North Carolina, John was arrested on December 7, 1993 at the Seymour Johnson Air Force Base in Goldsboro, North Carolina for hammering on an F15 nuclear fighter bomber in an effort to “beat swords in plowshares,” according to the biblical vision of the prophet Isaiah. Along with activist Philip Berrigan, he spent eight months in North Carolina county jails. John has been arrested over seventy-five times in acts of nonviolent civil disobedience for peace, and has organized hundreds of demonstrations against war and nuclear weapons at military bases across the country, as well as worked with Mother Teresa and others to stop the death penalty.