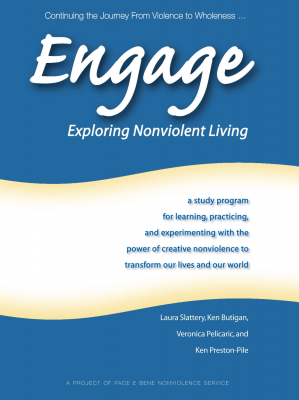 Full of stories, exercises and resources, Engage is a workbook to learn, study and practice the nonviolent options available to us. It offers a guide for groups on how to take action for justice and peace in the midst of war and injustice. Engage is ideal for advocacy organizations, faith communities, citizen action leagues, campus networks and any group seeking to work together to create a society committed to justice, democracy, peace, sustainability and equality.

The Need for Skills for Personal and Social Change

Every day, throughout the world people face the daunting challenge and consequences of violence and injustice. Some people confront this violence with violence. Others remain passive in the face of this destructiveness. Neither of these approaches, in our estimation, lead to long-term solutions because they often fail to address the root causes of violence or stop the cycle of destruction, resentment, and retaliation that violence and injustice create.

There are a growing number of people around the world, however, who are using the more effective approach of creative nonviolence, the subject of our study program, to bring about change in their societies. Some current examples include the bringing down of Serbian president Slobodan Milosevic in 2000, the frustrated electoral fraud and restored democracy in the Republic of Georgia in 2003, and the Orange Revolution in Ukraine in 2004, which cleared the way for the rightful installation of the popularly elected president.

People are also using nonviolence to challenge personal, interpersonal, and social patterns of violence in their own lives. The more we are equipped with the vision and skills of nonviolence, the greater the chance for the emergence of effective nonviolent solutions in our lives and in the world. Engage has been created for this purpose.

We have chosen to name this program Engage because it indicates action, response, involvement, and an effort to address and solve problems. We seek to re-frame how nonviolence is perceived. If we see it differently, we can tap its power. This is especially urgent because, despite the growing success of nonviolence, nonviolent people power is often ignored, misunderstood, and under-utilized. Assumptions based on selective readings of history and a set of persistent stereotypes (which assert that nonviolence is passive, weak, and ineffective, in spite of growing evidence to the contrary) block access to this power and hinder its deployment. The understanding of nonviolence that we have and that is used throughout this book is that nonviolence is a creative and active power for justice and the well-being of all that uses neither violence nor passivity.

From Violence To Wholeness

the residents of a housing project in a Midwestern city in the United States who used this process for a year to constructively transform the despair, rage, injustice, and violence they faced in their interpersonal relationships and in the midst of dehumanizing conditions. After this yearlong program, a pattern of suicide and physical violence ended.

These are just a few of many ways that this program has been used to help in the creation of nonviolent transformation.

Building on the success of this project, the new Engage Study Program is designed for use in a wide variety of religious and non-religious settings to bring the power and tools of nonviolent living to people throughout society.

Engage offers participants an orientation and process for introducing you to the ongoing spiritual journey of the nonviolent life. It recognizes that this journey is life-long. It does not pretend that one “achieves” this in twelve weeks or even twelve years. Pace e Bene regards this training as a modest introduction to some tools and techniques with which to experiment. It offers a vision and toolbox that may be handy in applying grounded nonviolence to the challenges of our lives and to the cry for change and healing in our world.

Guided by four commitments to relationship building, diversity, spiritual practice, and nonviolent action, Engage seeks to support the deep, slow work of becoming more whole human beings. It seeks to do this by:

Offering a leadership training program for those interested in facilitating and supporting workshops, retreats, and study groups.

The Structure of the Engage Study Program

This program is designed to be a small-group learning process in personal and social transformation appropriate for a wide range of settings. It can be led by people with a minimum of facilitation experience, not only by those with significant background in leading group process.

The more experienced a facilitator is, the more effective she or he will likely be, and it is for this reason Pace e Bene offers the three-day Engage Facilitation Training. For those who wish to gain more in-depth skill in facilitation, we encourage you to take this training.

At the same time, the curriculum has been organized so that people with little formal facilitation training can carry it out.

The Study Program is composed of twelve 2.5-hour small-group sessions.

Each session uses a multiplicity of learning styles and methods to explore nonviolence: story telling; role-plays; small and large group discussions; creative imagination exercises; journaling; and action. A “Wall of Learning and Growing” is put up each session for participants to write or draw whatever insights or awareness they are having; this will indicate the cumulative learning going on through the process. At the end of each session in this book, several blank pages are provided for participants to write about the process, their actions, and their reflections on the readings.

A Word About This Book

The Engage Study Program represents a substantially revised and expanded version of the From Violence to Wholeness curriculum that Pace e Bene Nonviolence Service first published in 1996. It reflects the feedback that we have received after leading hundreds of workshops based on this material and after hearing from many people who have used this book in study programs, classes, and trainings.

More significantly, the current book has been broadened to be useful and accessible to people from all walks of life. The original format, emerging as it did from a Franciscan nonviolence project, had been designed primarily as an exploration of Christian nonviolence for people in churches and faith-based organizations. The response in the intervening years has been very robust from many churches and denominations, and we are passionately committed to continuing strong and vital nonviolence education programming in many religious settings.

The primary reason is simple: we were asked to do it. An increasing number of people began coming to the From Violence To Wholeness workshops and study groups who did not identify as either Christian or religious. They told us that this was a powerful process, and it would be even more powerful for them if it were framed more broadly and inclusively. They urged us to develop a “general audience” format.

Their prompting gradually helped us see a second reason to do this. Not only might we be able to create a program that people with no explicit religious stance would find comfortable and fruitful, but perhaps this process could also be one where people from many different religious traditions would be similarly comfortable. We set out to craft a framework that in either case would create room for this flexibility and contextualization.

Finally, this line of thinking brought us to yet another, but related, reason: to help encourage the process of mainstreaming nonviolence and peacemaking. Such a “civil society” format could be used in an endless array of public- and private-sector settings — social service agencies, schools, nonprofit organizations, police departments, corporations, and any number of groups and voluntary associations.

The more people from all walks of life can participate — and participate together— in a nonviolence formation process, the more widely the tools of nonviolence will be distributed. Even more significantly, the more people gain this vision and toolbox, the more widespread will be the growing awareness that theconventional default positions of responding to violence (either passivity or more violence) can be trumped by the creative and audacious nonviolent alternative.

Interestingly, there was near-universal assent from all who asked us to create this new book that the program continue to be grounded in an inclusive spirituality that takes seriously the deep transformation that nonviolence implies. In light of this, we have again sought to offer a process that roots the nonviolent journey in the profound mystery of encountering and engaging with the woundedness and sacredness of all beings.

The development of this Study Program has been guided by a desire to offer a nonviolence education process that is inclusive and accessible to people from many contexts and orientations. At the same time, we did not want to purchase this accessibility at the price of spiritual depth. If nonviolence is regarded or approached only as a political, economic, cultural, or sociological phenomenon, it loses its heart. Nonviolence is rooted in the depths that make alternatives to cruelty and injustice possible: love, compassion, hope, possibility, self-transcendence. These are powerful forces and energies that draw human beings to our inmost, elemental foundations, even as they urge us to change the world.

These depths are central to nonviolence, and therefore it is not inappropriate to term the nonviolent life a kind of “spiritual journey.” But to take this approach does not mean that a spiritually grounded nonviolence must only reflect a particular religious tradition.

There is great richness and depth in specific theologies and practices of nonviolence, peacemaking, and justice in many religious traditions, and there is enormous power in the members of each tradition understanding, claiming, and deepening its particular visions and practices designed for personal and social transformation. It is for this reason that Pace e Bene has worked for nearly two decades in Christian churches and communities. At the same time, though, there is power in recognizing how the spirituality of nonviolence is a legacy of all humanity in many settings, and in creating a program where people from all — or no — explicit religious orientations can explore these depths.

We therefore set out to instill in this book an “inclusive general-audience spirituality” that seeks to open space for people from many different social locations to reflect on a spirituality and practice of transformative nonviolence. This inclusive spirituality is the living, unfolding experience of our journey toward wholeness in relationship to our ultimate value and meaning as persons, communities, and humanity. Put simply, inclusive spirituality is life creatively and compassionately seeking the wholeness and well-being of all.